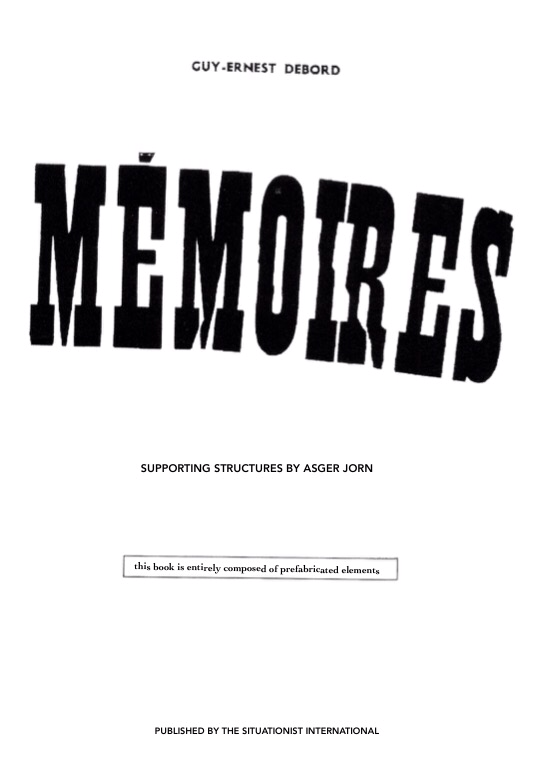 The document has been put together as a facsimile of the original – with  Debord’s detourned text juxtaposed in spatial relationship with Jorn’s “supporting structures”.

Every word of the text is appropriated – in a few cases from Debord’s own works (including “Report on the Construction of Situations” and the script of “Howls in Favour of Sade”). Other indentifiable sources are the plays of Shakespeare, the oratory of Boussett, Baudelaire’s prose poetry, Stevenson’s “Treasure Island”(!), along with snippets from Apollinaire, Racine, Edgar Allen Poe, François Sagan and de Gaulle(!!!!) amongst many, many others.

Where existing English translations existed (or where the original text is in English) I have used these sources. All other translations are my own, made with invaluable assistance from Mehdi el H.

An interesting aspect of detournment is that the meaning of phrases can be altered by the other phrases surrounding them – so in some cases this has encouraged me to deviate from the existing translations to allow for the alternative meaning revealed by the surrounding text.

As you can imagine this has been a much bigger task than the “side project” I set off on over a year ago. But I’m really happy to be able to finally present it as a finished project.

I hope you enjoy it!

This entry was posted in Debord, Jorn, translation and tagged Memoires. Bookmark the permalink.